Do you have a favorite location you like to photograph or collect specimens? Share these locations with your fellow members by submitting each location as a topic. You may submit one (1) location per day and illustrate each location with up to four (4) images. Please, follow the image posting guidelines in place in all of the other forums and galleries.
Locked
3 posts • Page 1 of 1

The microscopists might have got by without hearing about this place, but I'm sure anyone with even a toe dipped into classic nature photography has at least heard of the place, and probably seen more than a few photographs from it. I'm only mildly interested in birds, but I find the "birdscapes"--Landscapes using masses of birds as a central element--Here to be amazing.

Bosque del Apache National Wildlife Refuge is an important link in a variety of birds during migration. The refuge pays farmers to grow crops there (it is in the Rio Grande Valley, so it is quite moist and fertile despite being in New Mexico) for the birds to eat. The best time to go there is in December and January, when there are typically (these are real numbers) about 27,000 snow geese there, and about 8,000 sandhill cranes. I've been there three times--The first two in December, the last one in November.

The biggest spectacle at Bosque is the morning blastoff of snow geese. They spend the night in big shallow water impoundments. Early each morning, the snow geese take off. If you're lucky, they do it all at once, seemingly by telepathy. It is amazing: 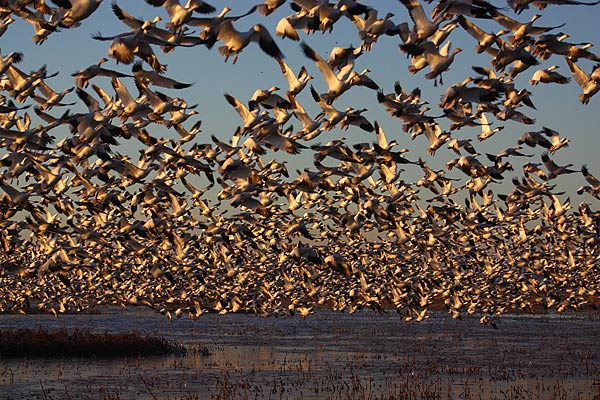 To answer the question in your mind, I got "bombed" twice during this blastoff, and my car, which was right behind me, was smothered in goose poop. But it was worth it!

Normally the birds go earlier than in the previous photo. If you have a good sunrise behind them, the combination of sunrise colors and (if you are lucky) New Mexico mountains is incredible: 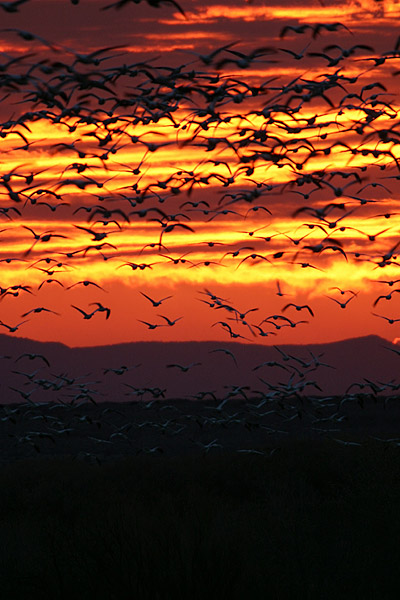 After the excitement of the morning blastoff, you have three choices: If you get going promptly, you can go to a different area where it is easy to get flight shots of the big sandhill cranes taking off (they go individually or in very small groups, and don't have the drama of the snow geese mass blastoff). My flight technique s*cks, so I don't have any good crane flight shots to show. I usually go over to the agricultural field and photograph mass shots of the geese and cranes feeding. This shot was taken in November--This gives some advantages, there is a bit of color in the trees in the background, plus they have only just started cutting down the corn, and they start closest to the road: 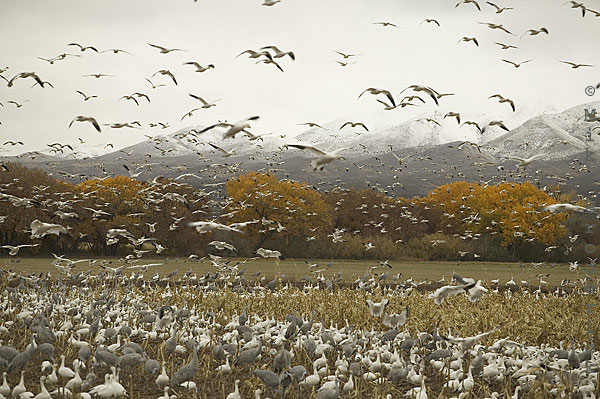 I'm not a birder, but even I can't resist getting into my car after getting my fill of mass images, and going "sniping" for birds using my 300/2.8 (bigger is even better of course) to get individual shots. In this case, I got incredibly lucky. American Kestrels are normally very shy. This is the only time I've seen one this close: 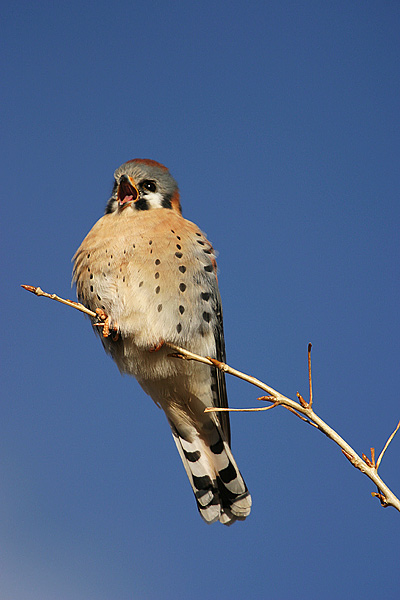 If you are lucky, it will snow when you are at Bosque, giving you some unique opportunities. This happened to me on my November trip. It didn't stick, but it looked awesome while it was coming down: 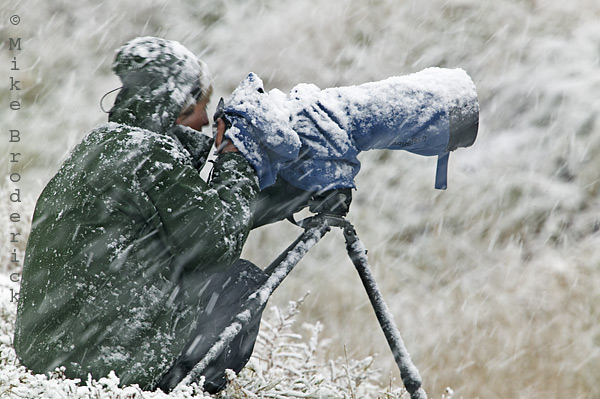 At the end of the day, you can watch the geese land en masse, and if you are lucky you'll have a good sunset for some final images. The dark spots on the water here are sandhill cranes. 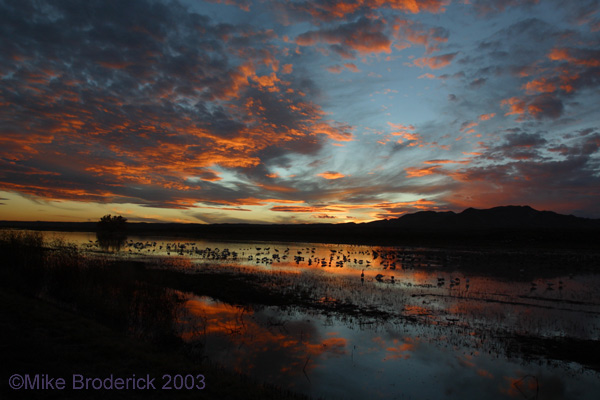 I like Bosque because it is close to me--A nine hour drive, so that if I leave Oklahoma City early, I can actually be in time to shoot the sunset the same day. Plus it, is an honest-to-Gawd top 10 nature photography site that I can reach by staying in the Motel 6 for $40 a night! How can I pass that up?

It's also very kind to us overweight and out of shape photographers. You can have an outstanding photo trip and never carry your equipment more than twenty feet from the car. Seriously!

Yep I heard about this place, but it is not close to me. Bombay Hook is, and the images you posted here are pretty much what you get on the east coast (minus the mountains). The snow geese are amazing. At Bombay Hook, you do not have to walk much, if not at all. You can shoot right from the vehicle as the road is right there at the water edge. One day I might make it out that way, and I will try to stop in and take a look.
Sue Alden
Administrator
Repost of my images are welcome
Top

This place and Lake Martin are both pretty much within my reach if gas prices ever come down. You know its too bad that I had not got back into photography while I lived in SW Arkansas. This could not have been no more than a few hrs. drive away from my home in Amity. Really like that snow photo Mike, has that National Geographic touch to it.

and if you go there again and as I am sure that you are well aware..."don't look up."